Compelled with my competitive nature, I clung onto a nice pace of a neon-suit Team racer. He helped bring me within contention of super strong skier from Banff, Theresa Gawron, who sped away on Leg-1 descent. my neon racer - photo loppet.ca, J. Bannon
Realizing I best begin refueling, I went for a sip of my yummy fuel energizing Vega Sport drink from my Camelbak. This was about 15-km into a fast paced race, yeah much too late! Yikes, the darn hose was frozen. This has happened only once to me in a race so I did what I could to save the hose, tossing as much into the collar of my shirt as possible. Unthawing was not happening. As I skied, I nibbled on the hose to break up the ice not realizing I bit into my lip getting a little blood on my race number. Replenishing with hydrating energizing liquids was critical in a 68-km race. Meanwhile I dropped off the pace as I was concerned with refuelling.

Into Leg 2, it was critical to get the camelbak functioning so I stopped. Some guys passed by. Lucky for me, I saw x-c skiing friend Mo at an intersection cheering on her teammate. I asked her to save my camelbak. Mo helped me put my jacket on and I kept onwards with no frozen beverage. Meanwhile hypothermia was setting in as I was shivering. 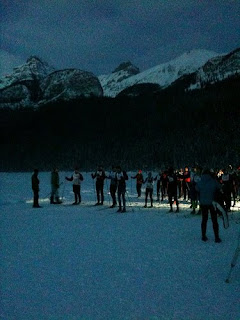 starting on the Lake (find little Marg!) - pic from loppet.ca

The start temp up top at Lake Louise was a comfortable -11C. As we descended 250m elevation quickly within the first leg, the temperature actually dropped to a frigid -16C. Unknowingly, this was affecting a few skiers. At the end of Leg 2, Mo was there with my Camelbak in action. THANK YOU MO! Darryl's support Meaghan left behind a cup of my special protein recovery mix. Within 10 minutes, I stopped shivering, was warming up and catching the guys who had passed me. Yay!!! Apparently, Meaghan also left me a cup of my "green" drink at the end of Leg 3 which I missed as I passed thru. Later, I heard everyone wondered what the heck it was being green and all! 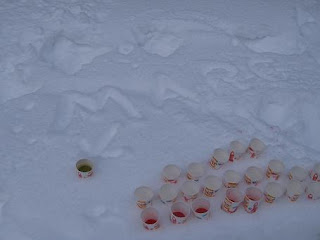 Leg-3 feedzone with my designated sport drink - too bad I zipped thru & missed it! - photo Meaghan


It was close for me to have to stop my race. I would have taken the time to warm up in someone's vehicle, get beverages and food into me and hopefully recover so I could continue on. My learnings are to ensure my race food is in working order... food accessible which is was in my side shorts pockets and camelbak functioning. Most importantly to drink/eat early in the race, no matter what race mode I'm in, food is IMPORTANT. I am SO glad I brought a light jacket with me. It saved me temporarily. Whatever happens, these races are on the edge of survival in between the feedzones. I AM responsible for my well-being and will do so.

The conditions for the first 30-km were awesome. The snow was surprisingly fast with the fresh snow buried in the old tracks. The crazy technical sections were not icy and safe to go thru. Into leg 3, we had to go over the typical chopped off shrubs section where needed to be cautious to lift a ski here and there. This is where adventure skiing is at its finest. There is no other race out there with as much fun of an adventure as this one! After 30-km it is so topsy-turvy and the senses have to be on full-time "aware" for obstacles... trees, branches, rocks, ice flows, acorns, pine needles, leaves, grassy-hay(!).

Many times we crossed highway 1A where volunteers shovelled snow onto the road to help us cross. With cars passing by, the snow became gravel-laden dirt coloured. 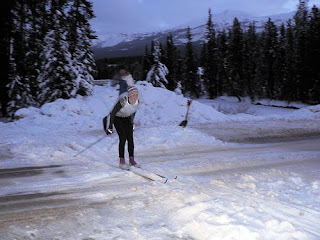 like that is good for your skis! - photo loppet.ca

On leg-5, one section of road was not covered. The volunteer said "you MUST take your skis off". I questioned "Must I"? She quizzically looked at me and said "no, I guess not" as I walked across the road gently with my skis. We had already skied over so much crap, I was not concerned. I have officially designated these skis my "Lake-Louise-to-Banff-Loppet" skis after racing this event many times. 50m later was a train track crossing where again no volunteers were covering it with snow for us. I proceeded to walk on the jagged rocks side-stepping over the tracks to the dismay of the two men skiing with me. I laughed saying 100lbs won't hurt these skis! I then took advantage to double pole away on the short river section to the crazy marsh section as they had to put their skis back on. 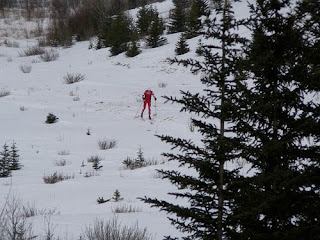 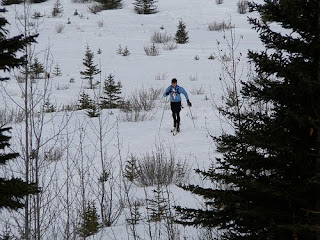 Marg happily almost thru the BackSwamp - photo loppet.ca
Reaching the Sunshine overpass, I removed my skis and ran on the icy pavement 800 metres to the next trailhead. We were allowed to skate-ski this section which was perfect for the super fast flattened trail and my waxless skis by this point. Skiing to the Sundance trail was so much harder than I remembered. It was up and up and up, not that I don't enjoy that, just forgot it was there and I was tired. The Sundance trail was barely laden with snow hiding the odd teeny stone. I hit a stone slamming to a halt landing on my knees. That little stone created more damage to my skis than walking over that road.

Finally hit the river section with a few more km to the finish. A slight wind and tough pole plant, I happily made it to the cheering finish-line people. All in all, I am SUPER glad I managed to overcome the silly hypothermia ordeal and complete the event in one happy piece!

Tips for me for next year's race... make sure that my cool shorts with side pockets fit snugly overtop my tights... I kept having to pull them up as I had plumber's butt going on with them dropping down! Irritating and difficult with my nanu gloves on.

I pre-waxed my skis accordingly to expected weather reports from Sat morning when the race was Sun morning. I went a little too warm with my wax though managed to scrape off a little and apply what I needed with 15 min to spare race day morning. After base layer, I had VR50(!), VR45, VR50(!), VR45... scrape off stuff, corked it in, then applied 2 more layers of VR45, with two thins layers of VR40. Worked for me I'm just over 100lbs. Temp was -11C at start, cooling to -16C then finish at -5C.

Thanks to the organizers for another well-organized event though I somehow missed out on the wicked Lagan's chocolate insanely loaded sugar brownies that provide jet-fuel. This was the first year the race offered a shuttle bus from Banff to Lake Louise at 6 a.m. which helped me out immensely with being a solo racer. Thanks for the lift!

Things I forgot to mentions in my race story...
After the Sunshine overpass in the run approach to Leg-6 trailhead, there was a cattle guard where only the middle half was covered with plywood. The plywood was too far to jump to. I had to carefully make each foot placement on the rounded grates with slippery ski boot bottoms as my pole straps were attached to my hands and each hand holding a ski. With the sketchy stability, one of my skis fell out of my hand and down thru the cattleguard. Lucky it didn't have far to go. I grabbed in, carried my skis/poles in a pile and carefully inched my way to the plywood. I felt like a little kid carrying too much stuff! After the plywood, same thing, had to be super cautious not to slip on the rounded grates. This feat would have been easy for any ski racer going across without skis/poles. It was dangerous without the cattleguard fully covered lengthwise, and not just for the height-challenged!
An interesting topic comes up for the Leg 5 to Leg 6 transition. It is known Legs 1-5 of the race are classic legs with an allowance to switch gear and skate-ski Leg-6. I overheard that a lead guy was seen skate-skiing thru the backswamp - did he not know spectators were watching him or did he just not know it was technically a classic race?! Then there is lack of clarity in the rules if a solo skier who wants to switch to skate-ski gear that they would just have to run freely 800m to the Leg-6 trailhead and put on their fresh new gear there while unsupported solos would have to carry everything. Not a big deal, just need clarity so then it's a defined choice on picking the best way for next time.
Rules help set the ground for a fair race. Myself, I had received support with my Camelbak in between legs, so technically I'm not sure where that falls for this race. Hope to get back to the organizer with some constructive feedback.
Posted by Marg Fedyna at 8:01 pm

Marg Fedyna
...pursuing my passion to be active, intrigue with those upon my path, energized by plants... "What is here to explore?!"