the La Ruta of x-c skiing

As I was finishing gingerly making my way on the uphill/downhill Hillsdale split on Leg 4, on the microscopic bits of snow left to ski on the pavement, dodging the odd stone... I defined the Lake Louise to Banff Loppet the "La Ruta" of x-c skiing! The snow was too deep this year for the snowmobile to pack a trail on the enbankment, so we had the choice to ski on the road or run. Glad I had my rock skis! 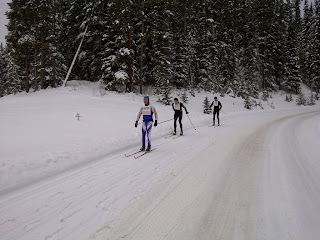 The lead guys descending on the Hwy 1A road - photos Tom Towne
.
"La Ruta" is a mountain bike stage race held in Costa Rica that has many environmental obstacles to endure. Need to go into that race with an adventurous mindset as it torments a bike racer that expects ride-able trails!
.
Same goes for the Lake Louise to Banff loppet with it's ever-changing course conditions each year. It is way more of an adventure than a buffed x-c ski race with pristine tracks. And the adventure is what makes it enticing to ski every year, along with the outstanding scenery of the Rockies. 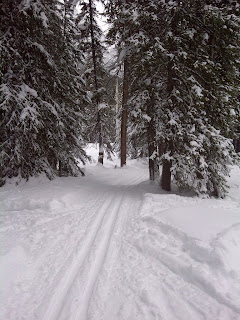 the race starts with nice tracks
.
Lots of snow and ultra warm race conditions (start: -4C, finish: +1C) made for a few course changes. We started just past Lake Louise due to slush and had only 50m flat before merging to descend Tramline trail. I had a clean start descending behind a few of the speedy guys. Fortunately for bits of fresh snow made the crazy hairpin corner do-able for me.


I skied with Sean Huggins-Chan, Tom Maier & Tony Smith for most of Leg 1. At least 8 of us squeaked by just in front of a long CPR freight train. Earlier this year on Jan 2, I had the opportunity to meet some of these skiers as I had joined in with a good 12 of them, including race winners Blaine Penny and Kirk Howell, for the 100 km PLPP challenge.
.
After the climbs on Leg 2, I got ahead with enough time to drink a Vega optimizer drink at Leg 3 transition kindly given to me by members of Team Lifesport. I jumped back on with Tony as he passed thru. It helped to ski with Tony to keep the ski pace up.
.
Leg 3 was set real nice with snowy tracks until after Moose Meadows hitting a 500m stretch of logging zone where it was suggested to run. I chose to zip thru on my rock skis hoping there was enough snow to glide on. When I hit the fresh snowy tracks again, one ski felt a little sluggish with debris so maybe next time better to run.


Leg 4 had the crazy Hillsdale pavement section which was a long slog. This was my pick for hardest section this year as it took alot of energy to double pole on the pavement on snow that was barely there. Needed to be light on the skis on the descent to watch for anything that could deadstop my skis fast.
.
Leg 5 had sections of deep trough where the bank was too high to pole next to the skis. I altered my double poling to a 45 degree angle so I didn't lose the poles into the deep fresh snow. The backswamp section that takes us out to the Sunshine overpass was like backcountry skiing in fresh powder.
.
I slowed down my pace to save energy as I was excited with the thought of switching to skate skis for the final leg from the trailhead. I was offered the opportunity to have my skate skis dropped off for me so I took it.


With my focus on switching skis at the trailhead... which is after the start of Leg 6 and after the cattleguard, 800m down the road... I quickly ran by the crowd at Leg 6 transition... and unknowingly, by my nicely laid out skate ski gear (!) 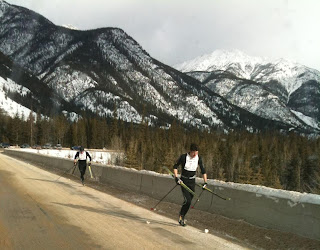 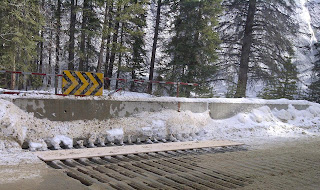 happy to see the wooden board over the killer cattleguard!
.
I got to the trailhead and was slightly dismayed not to see my skis or support person. I dashed back and forth abit then tossed on my classic skis and did my best to skate-ski on them.
Early on, Tom easily passed by me on skate-ski gear.
.
With a few spills when the wax stuck to fallen debris, I had a major face-plant going fast on a descent. Phew, amazingly not hurt... had to backtrack to pick up some fallen goods... onward. When I hit the river section I went over as many icy sections as possible to strip the remaining wax off my skis. I was surprised how quickly Leg 6 went by. 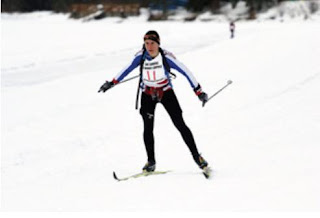 Marg skiing into the finish on the Bow River
dressed like an adventure racer with food in the side shorts pockets, Camelbak, Kahtoolas dangling from the waist strap
photo from Daniel Austin's article in Jan 25, 2011 Banff Crag & Canyon
.

Marg Fedyna
...pursuing my passion to be active, intrigue with those upon my path, energized by plants... "What is here to explore?!"